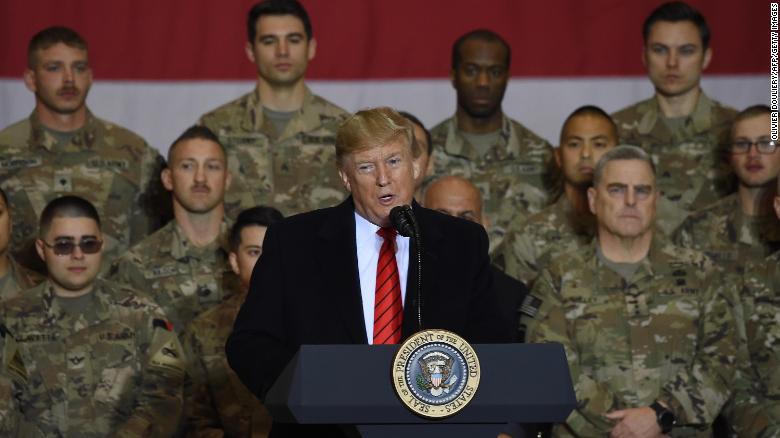 President Trump’s abrupt statement to pull all U.S. troops from Afghanistan led to confusion, as the Pentagon indicated it had received no orders to alter plans for a conditions-based withdrawal. Following this, Afghan negotiators were concerned that a hasty exit would challenge peace negotiations.

Trump took to Twitter, saying: “We should have the small remaining number of our BRAVE Men and Women serving in Afghanistan home by Christmas!”

Trump, who is seeking re-election next month, has made troops pullout from “ridiculous endless wars” the cornerstone of his foreign policy, even though thousands of troops remain in Iraq, Syria and Afghanistan.

The U.S. and Taliban reached an agreement in February for the U.S. to remove all of its forces from Afghanistan by mid-2021 in return for assurances by the Taliban not to allow terrorist groups to use Afghan soil for international attacks.

The Taliban have been engaging in intra-Afghan negotiations to reach an agreement on a permanent cease-fire and power-sharing arrangement in post-war Afghanistan.

Just hours before Trump’s tweet, National Security Adviser Robert O’Brien said the United States intends to reduce its troop levels in Afghanistan from 5,000 to 2,500 by early 2021.

Currently, there are under 5,000 troops in Afghanistan from an estimated 13,000 when the agreement with the Taliban was signed on February 29.

Laurel Miller, a former top diplomat who now serves as director of the International Crisis Group’s Asia program, said, “It’s very strange indeed to have the president of the United States say something out loud and then have all the rest of us wondering if it really means anything,” she said.

A sudden withdrawal, she continued, “makes no sense in terms of U.S. national security or good negotiating practice. It only makes sense in a political context if you think that’s a selling point to voters.”

The Taliban applauded Trump’s tweet as “a very positive step as part of the implementation of the agreement between the Islamic Emirate and the United States,” according to a statement by spokesman Zabiullah Mujahid. He said the Taliban would fulfill its “commitments” under the deal.

At the moment the Taliban and an Afghan government-appointed negotiating team are holding peace talks in Doha, Qatar, which started several weeks ago.

Talks have been slow and little details of the back and forth have been released.

Afghan government forces continue to struggle to maintain security in areas under their control. Afghan officials have warned that swift US withdrawal could further destabilize the country.

The former author has majored in Political Science and Media. She is a Film and History enthusiast who hopes to be a war reporter. Currently, she writes about socio-political issues.
She can be reached at shayannaveed@thecorrespondent.pk