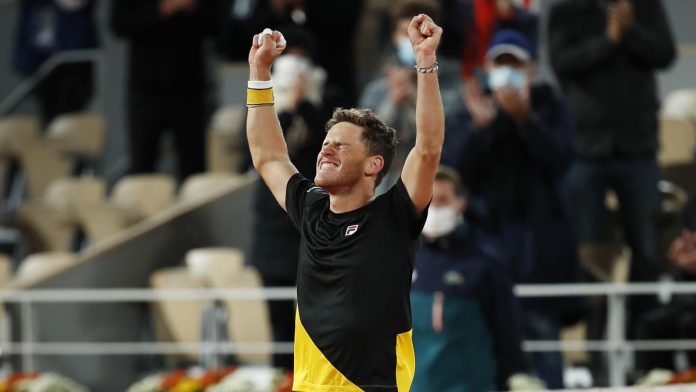 Schwartzman came on Court Philippe Chatrier all too aware of the challenge and opportunity at hand. While he has been on a high since his win against Rafael Nadal to reach his first Masters 1000 final but many thought Thiem, who won his first grand slam last month will eventually prevail.

By the time Dominic Thiem and Diego Schwartzman had stopped hogging Court Philippe Chatrier night had fallen on Paris yet two matches were still to be played. To the 750 fans present, it didn’t matter. They were proud witnesses to a five‑hour classic as Schwartzman eventually recovered to reach his first grand slam semi-final with a 7-6 (1), 5-7, 6-7 (6), 7-6 (5), 6-2 win against the US Open champion in 5hr 8min.

Even with draining energy, the Austrian’s spirit was majestic. In a match filled with nerves and endless exchanges, so often Dominic Thiem looked dead on his feet before rip-roaring back to life. Schwartzman led 5-4 and 15-30 on Thiem’s  serve in the second set before one of the worst misses of his career, then he failed to convert 5-3 leads in the third and fourth sets. As he felt the chances slipping away, he raged to his team.

“In the second set and the third set I was out of my mind,” he said later, laughing. “I don’t know what the people are thinking about me in that time but I was crazy, screaming, talking to my coach. My coach was saying: ‘OK, play tennis, nothing else.’ I was so nervous because I saw the chance today and I didn’t take it in the second and in the third.”

Schwartzman may not have grabbed his opportunities all the time but he has that relentless attitude to never give up. Two points away from defeat at 5-5 in the fourth-set tie-break, Schwartzman cracked a forehand on to the baseline and delicately placed a drop-volley winner. He took the tie-break and eventually the match.

“We are friends,” Schwartzman said. “I have a lot of respect for him and that’s why this match is very, very important for me. Not just to play a good match, winning after five hours in Philippe Chatrier, first time. I’ve played few times five sets here and I never win. I think at the end, this night, I deserve to win. Come on.”

Schwartzman will now rest ahead of his first major semi-final on Friday against the 12 time champion Rafael Nadal.

The story was filed by the News Desk.
The Desk can be reached at info@thecorrespondent.com.pk.

Fawad, Azam to get notices for accusing ECP