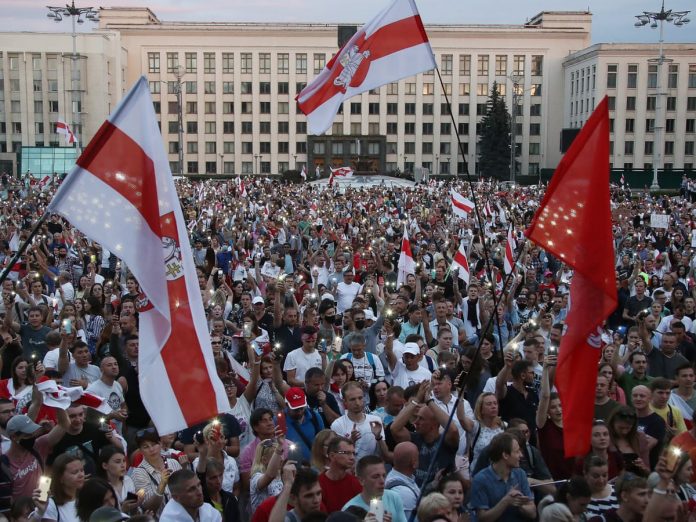 Mass protests have been raging in the eastern European state of Belarus for the past seven weeks, bringing the country to a standstill. The protests erupted after the Presidential elections of 9th August, which declared President Alexander Lukashenko as the winner of the polls, granting him a 6th term in office.

The official electoral body granted Lukashenko a landslide victory by 80% of the votes; the government claims these protests are orchestrated by “external forces,” whereas the opposition led by activist Sviatlana Tsikhanouskaya claims to have won 60% of the actual votes.

EU and North America have been quick to respond to the situation, placing travel bans and asset freeze on a number of high-ranking government officials. These include Interior Minister Yuri Karaev and top security official Alexander Valerievich Bykov, whom the EU accused of “torture of peaceful demonstrators,” the US announced sanctions on eight officials it claims had roles in the “fraudulent” election. Minister Karaev is also on that list. The UK and Canada have already imposed travel bans and asset freezes on President Lukashenko, his family, and other officials. The governments of Belarus and Russia responded to these series of sanctions by putting counter-sanctions and travel bans on EU officials, details of which remain unclear.

International media (especially that of member NATO states) has been particularly interested in this situation because of the Belarus-Russian nexus. Belarus and Russia have a Union State, which was brought into effect in 2000 (by Putin and Lukashenko). This Union State structure allows for greater cooperation between the two countries economically and socially. Both state’s citizens can freely move between borders and work without permits (much like the EU). Furthermore, the Lukashenkovian era has seen a clear integration of Belarus in the Russian bloc with facilitating major Russian projects of oil and pipelines entirely on Russian terms or the Russian language’s status elevated to match that of Belarusian. This nexus has been in tandem with Russia exerting influence over the region to counter the NATO bloc, which has historically tried to isolate Russia and diminish its role in European politics. The Crimean campaign by Russia was much in the same vein. In the recent past, Ukraine and the EU increased their cooperation, which resulted from a shift in Ukrainian foreign policy, after the 2014 revolution which ousted the pro-Russian President, to distance itself away from Russia and join the EU bloc. With the help of local ethnic Russian militia, Russia retaliated by taking control of Crimea, internationally recognized as Ukrainian territory.

The reason Belarus is dear to Moscow is due to its geostrategic importance. It is the historic gateway for Russia into Europe; Napoleonic France, Nazi Germany, Czarist Russia, and the Soviet Union all gained access to-and-from Russia through the Belarussian territory. Belarus is also critical for Russia as a defensive buffer, shielding the Russian heartland on the East, NATO’s threat, especially considering both the eastward expansion of the Atlantic alliance and the prevalence of a pro-Western Ukrainian regime since the Euromaidan protests led to the overthrow of Viktor Yanukovych. Hence, ensuring that Belarus is an ally or, at the very least, neutral remains a geostrategic priority for the Kremlin.

According to the Belarussian Primer, to help this geostrategically important ally counter EU pressure and sanctions, Russia signed deals worth over $700 million. On the contrary, the German chancellor Angela Merkel gave a clear statement supporting the opposition, saying that the sanctions were “an important signal because it strengthens the hand of those who are protesting for freedom of opinion in Belarus.”

Suppose the NATO bloc is successful in facilitating another regime change in Russia’s Slavic neighbors. In that case, this might spell a new era of heightened tensions between Russia and the rest of Europe.

Seven injured as US jet crashes in South China Sea